Cottage pie. It’s a staple comfort food. In my opinion, meat and potatoes is a signature classic and instant winner in any form it’s presented in, but I’ve taken that classic recipe, elevated it, and made it clean. My version isn’t quite as traditional as the original recipe, but I can promise you it’s delicious!

Fun fact: Cottage pie is often called or referred to as Shepherd’s pie, however a traditional cottage pie uses beef while a shepherd’s pie uses lamb. Similarly a Cumberland Pie can be made of either lamb or beef but it contains an extra layer of either breadcrumbs or cheese on the top. My version is a bit of a hybrid in that it uses ground turkey and a lot of veggies, plus I’ve shifted the cheese layer to the middle. I wonder what my pie would or should be called! 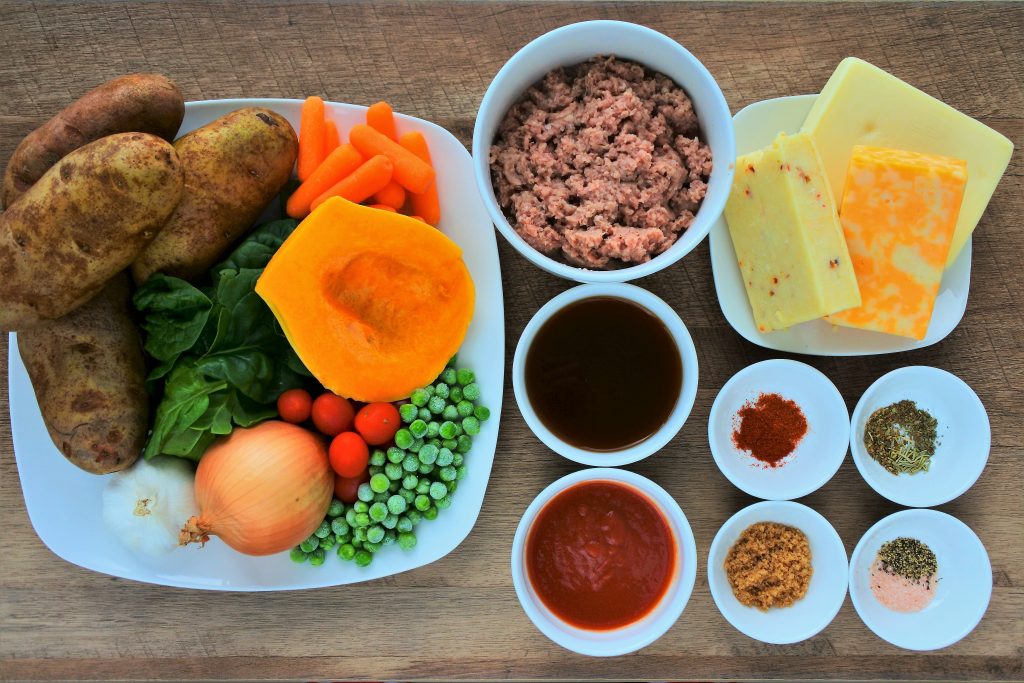 After we peel, wash, and slice our potatoes, we’ll boil them until they’re tender (about 15-20 min) before we drain them and add the butter, salt and pepper.

To make the meat filling we’re going to to cook the ground turkey in some oil along with the dried herbs and spices.

Once the meat is no longer pink, we’ll add the onions, garlic, carrots, and squash, and allow it to cook (covered) for a few minutes.

Next we’ll add in the broth, tomato sauce, and if you’re using either, the sugar and Worcestershire sauce. After covering it again, we’ll let it cook on med heat for a few more minutes.

The squash should be softening up nicely by now. This is when we’ll add in the spinach and cover the pan. Allow it all to simmer for a few minutes, after which you can smash (squash?!) some of the squash pieces so that the sauce thickens up a bit and the natural sweetness and creamy texture of the squash is fully incorporated.

Finally, we’ll add in the frozen peas. By now the sauce should be nice and thick, but in the event that it’s not as thick as you’d like, you can add in a tablespoon or two of your mashed potato mixture and blend it in to really help thicken the sauce to an almost gravy-like consistency.

The meat filling should be allowed to simmer. (This is where we turn our attention to…)

…The cheese! Now, this layer is wholly optional. With just the meat and potatoes this dish is already a star, but I love cheese, and the cheesy middle layer makes this dish SO good! I like using a blend of cheeses, so feel free to use whatever you like or have on hand.

We’re on the homestretch. Now we just need to assemble it. Meat. Cheese. Potatoes. After ridging the potatoes with a fork, we’ll set it under the broiler for a quick moment to brown the top and voilà! We’re done! A deliciously decadent Cottage Pie chocked full of meat, veggies, and other wholesome ingredients. Now all that’s left to be done is cut yourself a piece and enjoy.